During it’s history the Olavinlinna Castle has been the state border fortress for both Swedes and Russians.

The construction work for Saint Olaf’s Castle started in 1475, when a Danish born knight Erik Akselinpoika Tott decided to build a great fortress to protect the strategically important Savo region. The castle was to ward off Russian’s attacks coming from the east and thus ensure that the Savo region will stay under the Swedish Crown. Olavinlinna Castle’s history is a mixture of swords clashing in the middle ages, cannons rumbleing and every day chores inside the castle’s walls.

In 1975 after great renovation works the Olavinlinna Castle re-opened it’s renovated spaces and nowadays Olavinlinna Castle is open for public all year around. The castle’s museom showcases materials that were either found from the castle or are somehow related to it’s history. The orthodox museum has icons and other religous articles both from Finland and Russia. Public events and guided tours to the castle are held in many languages, in summer and in winter. Castle’s multiple spaces are rentable and host many different kinds of events and celebrations. Olavinlinna Castle with it’s over 100 000 visitors a year is the main tourist attraction in Savonlinna.

The first Opera Festival was held in summer 1912. Attending a political meeting in Olavinlinna Castle in 1907, the Finnish soprano Aino Ackté, already famous at opera houses the world over and an ardent patriot, immediately spotted the potential of the medieval castle built in 1475 as the venue for an opera festival. The romantic castle set amid lake scenery of ‘supernatural beauty’ could not, in her opinion, fail to impress all who beheld it and was thus the perfect stage for the Finnish music just bursting into flower. Nowadays the auditorium is covered and has 2264 seats.

Once a week during the Opera Festival visitors can join a tour of Olavinlinna Castle including the backstage regions. Though the Castle is a unique setting for opera, it cannot boast the same facilities for the artists as a dedicated opera house. Creating the backstage premises in Olavinlinna Castle has called for ingenuity to overcome the obstacles, because the Castle built at the end of the 15th century was not originally designed for the performance of opera! Read more.Kylpylaitoksentie 4 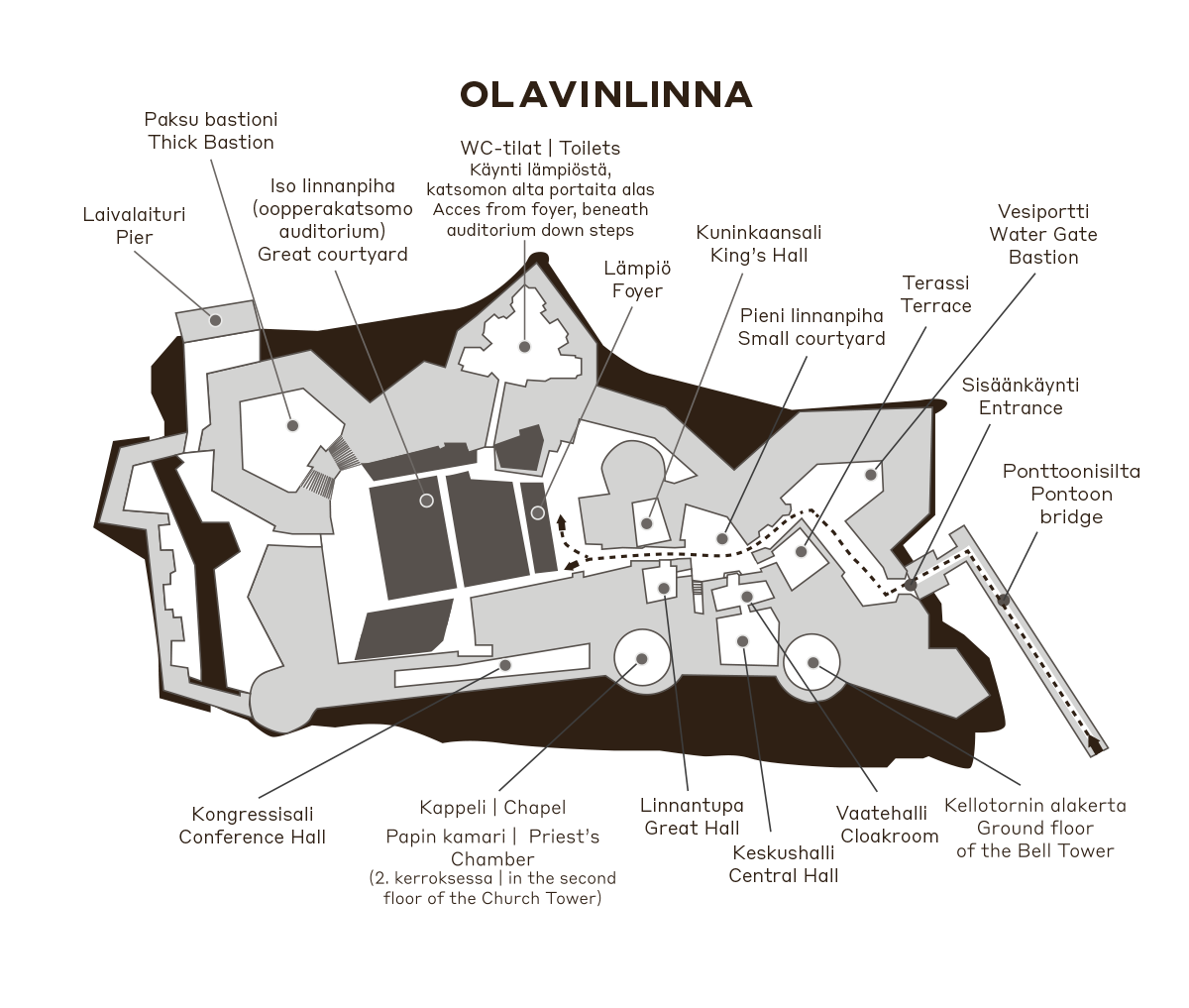 Olavinlinna’s revamped auditorium is better than ever before

New chairs, new cover, and improved visibility. What matters most is still the same: the unique atmosphere and the amazing acoustics.