Gioachino Rossini grew up in an opera orchestra pit, for his mother sang and his father played the trumpet. His musical career, first as a boy soprano, reached its zenith in February 1816 when, at the age of 23, he composed The Barber of Seville in a matter of weeks. Of all his 39 operas, this would be the one performed way and above all the others. He was 37 when he finished his last, William Tell, and would thereafter live for another 39 years, enjoying a diet rich in truffles at his home in Paris and moaning that opera would be so much more beautiful without the singers.

Opera in those days, the era roughly between Mozart and Verdi, meant bel canto. As the middle class grew and prospered, urbanisation and industrialisation gathered force, classical music and opera began to appeal to ever wider circles. The new, larger salons and halls required louder instruments. Singers had to rise to the challenge, and a new ‘beautiful’ manner of singing – bel canto – was born. Those best versed in the art were masters at producing long, sustained melodic lines and deft vocal curlicues, and opera was a perfect showcase for these skills. The singer was the star, the composer his humble servant.

Rossini was an exception. Works by him were staged at opera houses the length and breadth of Europe, and he even got paid more than the singers. Arrangements were made of his arias and sung by barbers and waiters. Statues were erected in his honour, coins were minted, cards were printed, dinners were held, his locks were snipped as souvenirs for maidens to place under their pillows, hats, walking sticks, neckties and gastronomic dishes were named after him, and amid the political pandemonium prevailing at the time, he was invited to attend the Congress of Verona in a bid to create harmony between the assembled kings and rulers.

Entertainment for the masses

Times they were a-changing. Estate society was proclaimed a thing of the past, technology was changing everyday life, science was upsetting the established worldview, and the church was losing some of its grip. Opera was at the centre of the action and the biggest form of entertainment for the masses. Audiences sported all ranks of society, from royals to rogues, and opera was better than theatre at addressing sometimes delicate issues. As The Barber of Seville only went to show. The original drama trilogy by Pierre Beaumarchais was censored at the end of the 18th century for ridiculing the nobility. Yet Mozart was able to compose part two of the trilogy, The Marriage of Figaro, for the imperial theatre in Vienna in 1786. And by the time Rossini had composed part one of the trilogy as The Barber of Seville, the various opera versions had smoothed the way for the plays themselves.

Opera was initially a serious art form emulating the ancient Greek tragedies. The full-length sung drama soon caught on and spread from Northern Italy to European cities. Various applications gradually took shape: the French added ballet to the brew, the English spoken dialogue, and Naples came up with the comic opera. Whereas a serious opera set in ancient times required not only five acts and a love duet but also a death scene, a comic opera could do the job in two acts set in the present day and without any grand arias. It could do so by drawing on the old, familiar characters and stories of the Italian comedy and French farce, such as those in The Barber of Seville. The plots often involved a quick-witted girl about to be married off to a dim-witted old doctor.

There might also be a housekeeper with a tendency to sneeze, a singing teacher given to gossip, and a groggy notary – or maybe a cunning servant and a nobleman disguised as a poor student. Costume changes, plots that failed, letters that fell into the wrong hands and a barber’s scene (still favoured by Chaplin at a later date) were all to be found in the operatic toolkit.

music is the Soul of the opera

But situational comedy, caricature, recycled stories and veiled social satire do not yet make a classic opera without that vital ingredient: music. All important in comedy is the timing. If the gaffe is too drawn out or the punch line is late, everything flops. In the theatre, a clever actor and astute stage director can achieve perfect timing, but in an opera, the responsibility lies with the composer. It is he (or she) who decides how to proceed, what to elaborate, what to repeat, and what the reaction will be.

Rossini’s music has a good-humoured, bubbling undercurrent. Much of the humour lies in the music, and if the events are funny, the music adds new dimensions. This is well illustrated by the finale to Act I of The Barber of Seville, for example: a nonstop musical extravaganza lasting 20 minutes and bristling with detail. First to make its voice heard is a bassoon capturing the degree of inebriety of the Count disguised as a soldier. People enter on all sides and join in a quintet until Figaro turns up, too, and makes up a sextet. Someone knocks on the door and the music stops. “Chi e” (Who’s that?) squeaks the bass, and in steps an officer. A five-part canon begins. Here, in other words, is infinitely orderly music in a situation that could not be more chaotic.

Each character has a different explanation and the officer cannot make head nor tail of what’s going on. But the music persists. More obstacles appear along the way, until there are no fewer than seven soloists all saying they haven’t a clue what’s happening.

The Act ends with a slow but sure crescendo – Rossini’s trademark. The melody bowls blithely along and the orchestra gradually swells to full strength, with cymbals and triangle crowning the lot.

Introducing the characters with one song

As in a serious opera, the characters in a comic opera introduce themselves with a song that describes them. Figaro’s self-assured boast (”Largo al factotum”) is not odious; it is entertaining because the clever music enchants us, as does the barber. The Count does not have a fine aria, because he enters the stage as the student Lindoro and sings a sedate serenade (”Ecco, ridente in cielo”) without revealing his identity. For the Count is a mighty nobleman with a dodgy reputation.

Rosina’s aria is the biggest, most beautiful and exacting in the whole opera (“Una voce poco fa”). In it she proves that, while superficially easy-going, she is made of sterner stuff and can if necessary turn nasty. Everything in the words is also in the music. Here we have a woman not afraid to take the initiative with a man; she should in fact be the opera’s main character. 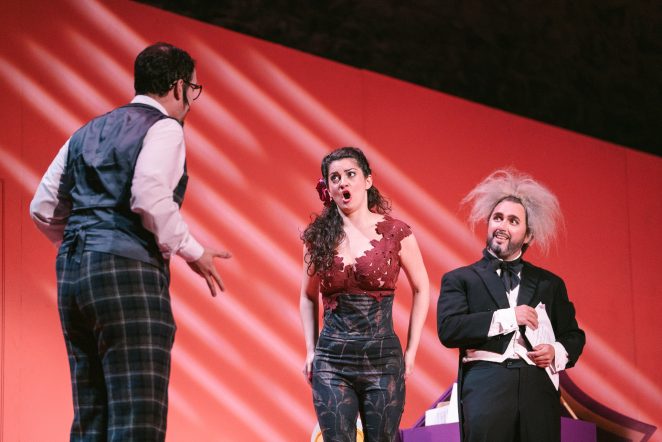 Bartolo’s own aria (“A un dottor della mia sorte”) shows he is a pompous oaf. He addresses his message at Rosina, threatening to have her confined if she does not obey. “Yes, I will,” he says, repeating the word “yes” no fewer than 14 times. Reiteration and an immoderately rapid delivery are comic devices Rossini simply loves. Basilio the music teacher, another bass, goes on about the power of rumour and gossip (“La callunnia e un venticello”). The result is a perfect marriage of text and music.

The aria sets off in a whisper, like a mere hint, and as it grows into a rumour, more instruments join the orchestra. He sings louder and louder, the rumour morphs into a scandal and the melody rises higher and higher. It all ends in uproar with a shout and the bass drum fires cannon shots, for a rumour can cause more havoc than a cannon.

In a comic opera, the ensembles maintain the tension in between the arias. The Barber of Seville has countless scenes with scope for situational comedy and involving several soloists; an example is the Count’s entrance, introducing the music teacher and driving Bartolo crazy with his pleasantries. Out of the mutual bowing and scraping grows a quintet in which Basilio interrupts the singing lesson.

Astonishment gives way to horror, which leads to unease and chaos that turns into bribery the result of which is a solution that causes astonishment. Round and round in circles. No one dies in a comic opera, and there are no love duets. Even the Count’s and Rosina’s only duet turns into a three-wheeler when Figaro reminds them of the awkward fact of the missing ladder. Because of course comedy wouldn’t be comedy without a ladder, would it?

Stage director Kari Heiskanen: is it ok to laugh at the opera?

“Good heavens, you should be able to laugh just anywhere,” cries Kari…