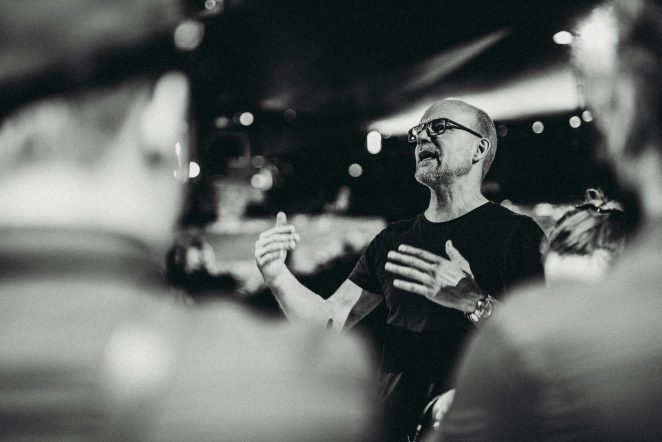 “Good heavens, you should be able to laugh just anywhere,” cries Kari Heiskanen, stage director of The Barber of Seville. Renowned for his impressive theatre career as an actor, stage director, script-writer and teacher, he is also an old hand at opera. The Barber of Seville is his 14th opera direction. “The story sees to itself in an opera; the stage director’s job is to ensure that it comes across. The turn of events, perspectives and tensions come with the story. If the opera is well composed, the music supports all this.”

The differences between directing for theatre or opera no longer surprise Heiskanen. “The director’s hands are tied far more in an opera than in a theatre play. At first, this came as a shock. You can’t cut the text, and you can’t manipulate the time and place as freely. The fact that you can hear good music all the time is, of course, nice!” Heiskanen also points out that characters in a play can be constructed by the way they speak and look. This is not possible in the same way in opera. “The score is quite strict. It determines the voice the singer has to produce. Otherwise you get told off.” Heiskanen is also aware of the traditions surrounding roles, so that they come to be regarded as the only “right” way of doing things. He doesn’t interfere with the singing but does express his views on the types of characters created.

Humour, communication and an ability to listen are, for Kari Heiskanen, vital tools for the stage director. “For me, there’s strict discipline at one extreme and complete anarchy and humour at the other, I think.” Of himself he demands the ability to be clear and concrete. “If the singers are to avoid being mere puppets, the stage director must be able to express the overall principle of his direction. Sometimes it’s difficult when the vision is – for me as well – of feeling and mood rather than defined in concrete terms. The final version only emerges in the making.” “Mistakes don’t matter. There’s no such thing as a gaffe. If a ship sets sail for New York but happens to call in at Hamburg on the way, that’s not a mistake. It gains something there, too,” says Kari Heiskanen with a reminder that this also applies to himself. He is not afraid to laugh at himself, and believes in the power of example. It’s the director’s job to spur the performers into making hare-brained and even illogical decisions. The ideas gradually grow clearer and arrive at the heart of the story. “Not even my ideas are all totally immortal,” he quips. “Comedy is the result of joint creativity and the testing of ideas, from all angles.“ 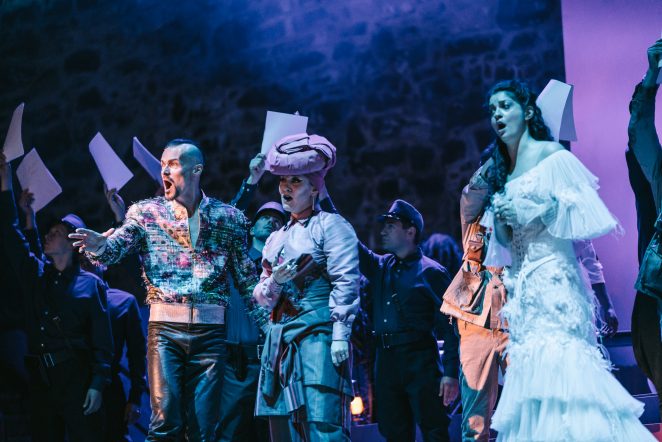 Another difference between working in theatre and opera is, says Heiskanen, the urgency that descends on opera 12 rehearsals once all are present, orchestra included. At that stage, work has to keep strictly to the time available. The most intensive time in a production, just before the first night is, he admits, sometimes stressful. “But Savonlinna is a ‘military camp’ and terribly inspiring. In between sweating it out on my own, I clear my head by going for a strenuous bike ride,” he says. This reminds him that Ville Rusanen is also a keen biker, and his eyes immediately acquire a competitive gleam. “I need to be really fit because Ville’s so much younger.”

Playing with ideas is part of the production process and concerns the whole team. Heiskanen thanks his long-time co-worker Antti Mattila for being prepared to jettison his first cherished ideas, to seek new ones and to endlessly polish his designs. “Everything springs from the stage design. This is the meta-level against which the whole work is projected. It expresses the epoch and era, and as you study it, you gradually get an idea of what to say and what to leave out. The whole genre depends on it.” Costume designer Teemu Muurimäki is a welcome new acquaintance for Heiskanen. “The costumes are of decisive importance in The Barber of Seville. Teemu immediately came up with some good ideas for the characters’ makeup.

His aesthetics are also enormously elegant and fresh. He’s an absolute genius in his field.” That Heiskanen is satisfied with his team is easy to see. The ingenious, entertaining music of Gioachino Rossini generates situational comedy such as is rare in opera and an inspiration for Kari Heiskanen: “For our Mr Figaro is the mother of all multi-talents and start-up entrepreneurs! He has retrained himself in just about every occupation. Businessis thriving and he is good at human relations.” Alongside the hilarity, The Barber of Seville also hasa sterner element and wild scheming by Figaro and the Count. “The audience knows everything will turn out well – but not how, and this is what makes it a picaresque Tale!”

3 highlights of the Savonlinna Opera Festival 2023

The premiere of summer 2023 is Gounod’s Romeo and Juliet.